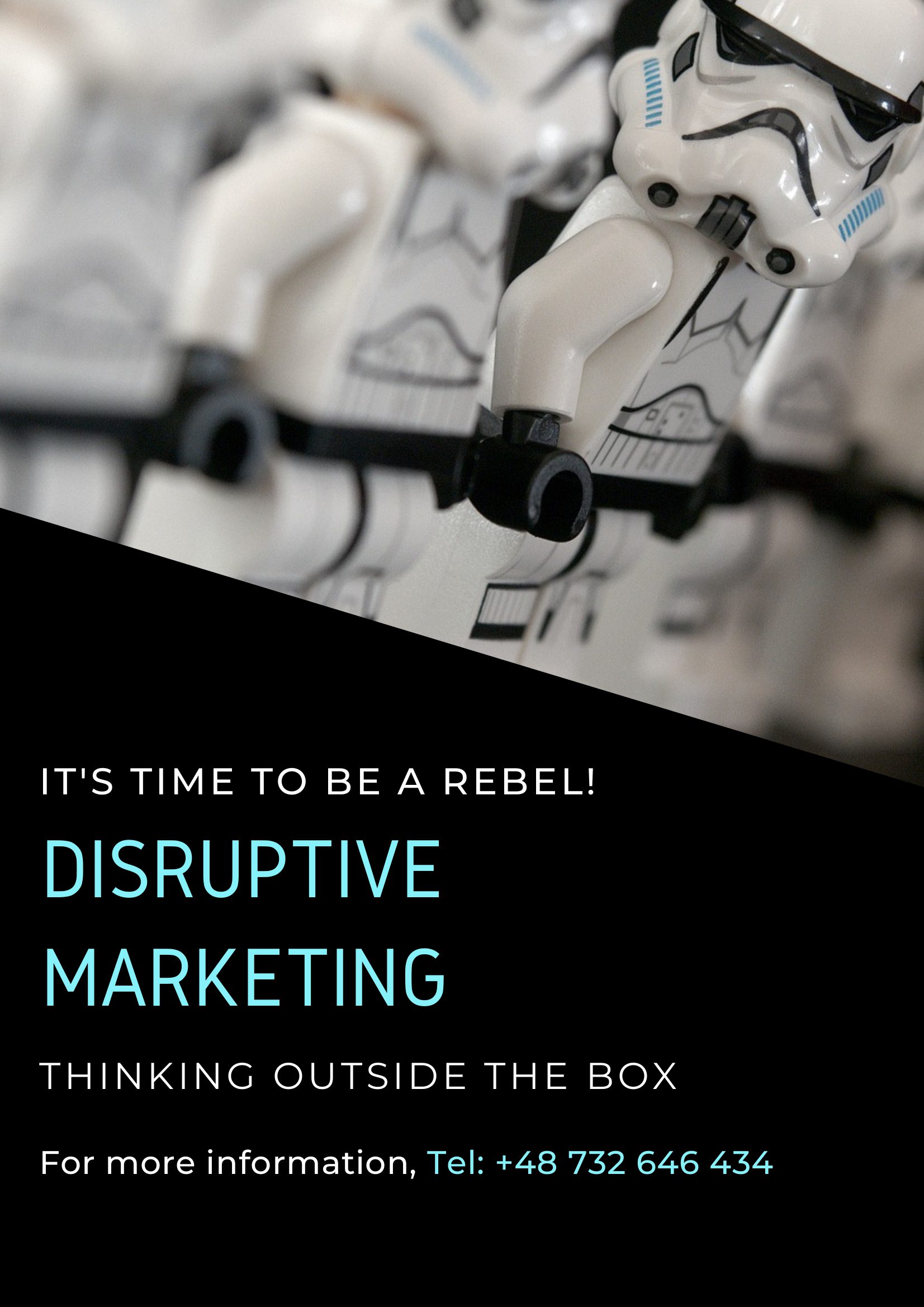 It's time to be a rebel!

Disruptive means giving people exactly what they want, usually accomplished by turning conventional marketing techniques on their head. Before disruptive marketing, there was disruptive innovation which is a process whereby a smaller company with fewer resources is able to successfully challenge established incumbent businesses – Just think about Netflix and what that did to the movie and cable industries.

What is disruptive marketing?

Disruptive innovation is about making things accessible to the masses when previously it was only accessible to the chosen few. Disruptive marketing uses the same idea, where it takes something marketeers used to do, and approaches it differently. It is about taking traditional marketing, throwing those techniques in the bin and using a completely different marketing model. It is rebellious! In the current world of smart phones and Internet, consumers want to be part of the marketing conversation, they do not want to be locked out, they want access. Disruptive marketing connects consumers with brands.

Nike ran a campaign on YouTube called “Better For It” which was a series of videos following adopted sisters Margot and Lily. Margot and Lily are very different, one of them loves to work out, with a YouTube channel and a large following. The other hates working out and has a different viewpoint when it comes to fitness. The girls get into a competition. The goal for Nike’s campaign was to be relatable. Most women can see themselves in either Margot or Lily. Nike was very successful. It showed that it was a brand not just for intense athletes dedicated to fitness, but also for those who don’t necessarily love breaking a sweat.

What makes it disruptive is that Nike doesn’t aggressively push its products, it gives a realistic portrayal of those who struggle with finding the motivation to work out, and it is incredibly relatable. Women can easily put themselves in either of those pairs of Nikes. We use cookies on our website to give you the most relevant experience by remembering your preferences and repeat visits. By clicking “Accept All”, you consent to the use of ALL the cookies. However, you may visit "Cookie Settings" to provide a controlled consent.
Cookie SettingsAccept All
Manage consent

This website uses cookies to improve your experience while you navigate through the website. Out of these, the cookies that are categorized as necessary are stored on your browser as they are essential for the working of basic functionalities of the website. We also use third-party cookies that help us analyze and understand how you use this website. These cookies will be stored in your browser only with your consent. You also have the option to opt-out of these cookies. But opting out of some of these cookies may affect your browsing experience.
Necessary Always Enabled
Necessary cookies are absolutely essential for the website to function properly. These cookies ensure basic functionalities and security features of the website, anonymously.
Functional
Functional cookies help to perform certain functionalities like sharing the content of the website on social media platforms, collect feedbacks, and other third-party features.
Performance
Performance cookies are used to understand and analyze the key performance indexes of the website which helps in delivering a better user experience for the visitors.
Analytics
Analytical cookies are used to understand how visitors interact with the website. These cookies help provide information on metrics the number of visitors, bounce rate, traffic source, etc.
Advertisement
Advertisement cookies are used to provide visitors with relevant ads and marketing campaigns. These cookies track visitors across websites and collect information to provide customized ads.
Others
Other uncategorized cookies are those that are being analyzed and have not been classified into a category as yet.
SAVE & ACCEPT
Our website uses cookies from third party services to improve your browsing experience. Read more about this and how you can control cookies by clicking "Privacy Preferences".